[97]
The Mexico national football team (Spanish: Selección de fútbol de México) represents Mexico in international football and is governed by the Mexican Football Federation (Spanish: Federación Mexicana de Fútbol). It competes as a member of CONCACAF, which encompasses the countries of North and Central America, and the Caribbean. The team plays its home games at the Estadio Azteca. Mexico is historically the most successful national team in the CONCACAF region, having won eleven confederation titles, including eight CONCACAF Gold Cups and three CONCACAF Championships (the precursor to the Gold Cup), as well as three NAFC Championships, one North American Nations Cup, one CONCACAF Cup and two gold medals of the Central American and Caribbean Games. It is one of eight nations[a] to have won two of the three most important football tournaments (the World Cup, Confederations Cup, and Summer Olympics), having won the 1999 FIFA Confederations Cup[5] and the 2012 Summer Olympics.[6] Mexico is also the only team from CONCACAF to have won an official FIFA competition, winning the 1999 FIFA Confederations Cup. Although Mexico is under the jurisdiction of CONCACAF, the national team has been regularly invited to compete in the Copa América from 1993 to 2016, finishing runner-up twice – in 1993 and 2001 – and obtaining the third-place medal on three occasions.
Filter & Sort




Authentic Mexico Away Jersey 2022 By Adidas

Mexico national team has enjoyed a lot of success on the football field. Are you looking for a Mexico jersey to support your favorite team? Gogoalshop offers a wide range of Mexico jerseys covering different versions from women, men to kids. You can even customize your Mexico jersey with the names and numbers of your favorite players, such as Carlos Acevedo, Kevin Álvarez, Jesús Angulo, Jonathan Gómez, Luis Olivas. So follow up with this guide to purchase the right Mexico jersey you truly need. 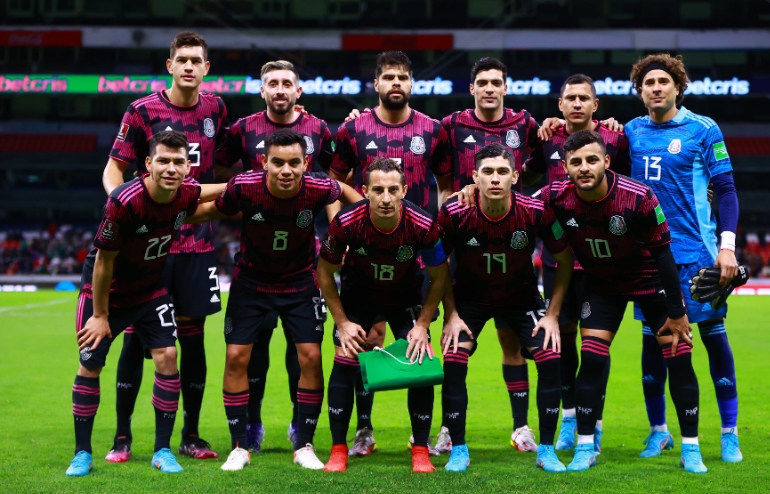 Mexico is one of the top soccer teams in the world, renowned for its fierce competitive spirit and exceptional talent. The Mexico national team wears a distinctive jersey emblazoned with Mexico's vivid green and red colors and adorned with a striking golden sun or eagle. This iconic jersey represents Mexico's boundless energy and unparalleled pride, serving as a constant source of motivation for players on the field. Whether Mexico is dominating an international rival or facing off against lesser-known opponents, one thing is certain: the Mexico jersey will always be front and center, bringing strength, speed, and skill to every match. Whether you're a diehard Mexico fan or simply an admirer of their legendary jersey, there's no denying that this top soccer team is truly unstoppable. And with Mexico set to take the field again soon at yet another world cup tournament, it's clear that they have only just begun to shine.

Patterns based on traditional textile art cover this mainly black jersey. The front is presented in bright Mexican pink. Also lighting up the jersey is the decoration of the neckline and cuffs and the Adidas three stripes on the shoulders. The new Mexico national team jersey will be paired with black shorts and socks that also have pink details.

There is no doubt that Mexico has a proud history of producing talented soccer players. From the likes of Javier "Chicharito" Hernandez and Jesus "Tecatito" Corona, to Rafa Marquez and Hector Herrera, Mexico's national team has consistently been stacked with world-class talent. Perhaps one of the most talented players in Mexican history is Carlos Vela. Also, there are also these significant players shining in the fields:

History of the Mexico team

Mexico first played international games in 1923 when they faced neighbors Guatemala three times within a week, notching up two wins and a draw.

The national team first met competition outside of North America in 1927 when they drew 3-3 against Spain. The official governing body was formed in 1927 and sent a team to the 1928 Summer Olympics in Amsterdam.

The home stadium of the Mexican national team is Estadio Azteca in Mexico City. It was built in 1966 and has an official capacity of 87,523, making it the largest soccer-specific stadium in the Americas and the third-largest in the world.

the 1958 World Cup in Sweden saw Mexico earn their first World Cup point with a 1-1 group stage draw against Wales. Defeats to Sweden (3-0) beforehand and Hungary (4-0) after ended their tournament at the group stage, though. In Chile, at the 1962 World Cup, Mexico was shut out in the first two games with 2-0 and 1-0 losses to Brazil and Spain, respectively. The 1966 World Cup in England had Mexico in a group with Uruguay, France, and the hosts. They drew 1-1 against France in the opener before falling to England 2-0.

Mexico is a nation with a rich footballing history, and its fans are some of the most passionate in the world. No matter where they are, they always find a way to show their support for the team. The Mexico jersey is one of the most popular items at GoGoalShop, and it's easy to see why. Not only is it stylish and comfortable, but it's also affordable. Whether you're looking for a gift for a Mexico fan or you're looking to show your own support for the team, the Mexico jersey is a great choice.